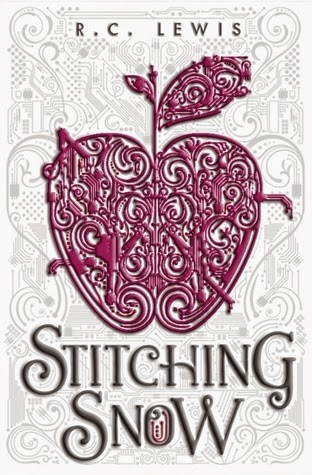 Princess Snow is missing.Her home planet is filled with violence and corruption at the hands of King Matthias and his wife as they attempt to punish her captors. The king will stop at nothing to get his beloved daughter back-but that's assuming she wants to return at all.Essie has grown used to being cold. Temperatures on the planet Thanda are always sub-zero, and she fills her days with coding and repairs for the seven loyal drones that run the local mines.
When a mysterious young man named Dane crash-lands near her home, Essie agrees to help the pilot repair his ship. But soon she realizes that Dane's arrival was far from accidental, and she's pulled into the heart of a war she's risked everything to avoid.
In her enthralling debut, R.C. Lewis weaves the tale of a princess on the run from painful secrets . . . and a poisonous queen. With the galaxy's future-and her own-in jeopardy, Essie must choose who to trust in a fiery fight for survival.

I'm completely obsessed with fairy tales - always have been - and this whole trend of retelling of our favourite stories is something I wholly support! We've had a lot of Rapunzel, Beauty and the Beast & Cinderella retellings over the last 5 or 6 years and I'm really excited for one about Snow White - being as all movie retellings I've seen have been terrible!
We're a generation that loves our fairy tales so why wouldn't I be waiting for this beauty to hit the shelves in october!!

What are you waiting for this fine Wednesday?