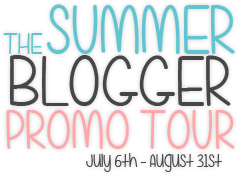 Today we have Stefani from Caught Read Handed. This is the part where I usually tell you a bit about them HOWEVER I think Stefani says I best herself. SO with a little cut and paste magic this is Stefani:

Hi! My name is Stefani, and I’m a mismatched socks, overflowing bookshelves, pot of coffee a day, Sonic Screwdriver, paint all over my fingers, rock-paper-scissors-lizard-Spock kind of girl with alopecia. I have a master’s degree in Publishing Studies from the University of Stirling in Scotland (yes, I lived in Scotland for over a year and I’m completely in love with it).

So for this post we had ourselves a little book club! We both had Everything Leads to You by Nina LaCour on our reading list and I thought this would be a really fun was to tick it off. Bellow we've answered some book club style questions and I will warn you now, if you haven't read the book then there are some MAJOR SPOILERS ahead.

Everything Leads To You
by Nina LaCour 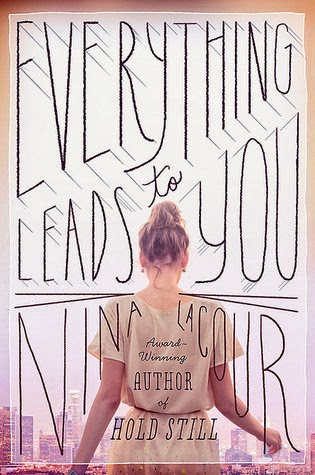 What were your first thoughts after finishing Everything Leads To You?

Mily: Awww! It was kind of perfect. I loved that the author made us (the reader) wait for the inevitable and that it avoided the whole lovely dovey, insta love jargon that a lot of YA books tend to over indulge in now-a-days. Super sweet and left me with a smile on my face.

Stefani: Everything that you said. This book was super adorable. It was really hard for me to put it down, so I very rarely did. I finished it in about a day. I could not stop smiling after I put it down either.

What were your feelings towards Emi?

Mily: I loved the way Emi’s character grew throughout the story. She started off as this heartbroken, almost love sick teenager with a lot of responsibility and no outlet for her pain. However, as the story progresses she found a way to be strong in her own right. I really liked that they didn’t have Emi and Morgan get back together to, as I had a feeling at one point that was where this was going to go. I think that the fact Emi learnt to put Ava ahead of herself and see her as more than just some mystery that needed to be solved was really moving and I fell in love with this character.

"I'm seeing her for the first time. Not Ava Garden Wilder, the rags-to-riches granddaughter of Clyde Jones. Not a tragic, romantic heroine.
Just Ava.
And I am utterly in love."

Stefani: You’ve said pretty much everything I felt about Emi. One of the notes I took while reading the book was “Lots of growth and change in Emi. Very real.” I loved Emi. She grew from this somewhat naïve, young-feeling character to a woman who was strong and independent. I loved her.

What was your least favorite part of the book?

Mily: Easy! When Ava and Tracey finally come face to face. Ah I wanted nothing more than to shake that damn women into being a better person. So what if she’s gay. So what if she’s not who you wanted her to be. She was still her daughter and I think Tracey needed a crash course in parenting.

Stefani: Oh my gosh, Mily! Quit saying all of my thoughts. Haha. That was my least favorite part too. I just wanted to hug Ava and tell her she should be exactly who she was and she didn’t need Tracey’s approval. I can’t understand not tolerating someone for the way that they are, especially something like sexual preference which you are born with. I really didn’t like Tracey.

Mily: Sorry… maybe we should have taken turns going first! Although I am glad you feel the same way, great minds and all that jazz!!

How did you feel about Ava’s integration into Emi’s life?

Mily: I did struggle with the suddenness of it all. I think that Ava was selfish at times. Even if it was understandable that she would rely on Emi and Charlotte I would have liked her to leave them out of certain parts of her journey. Especially when they broke into Tracey’s! I couldn’t help but be a little angry with Ava for that.

Stefani: I actually really liked Ava entering Emi’s life. I thought that it was good for Emi to have Ava in her life, because she broke Emi out of her comfort zone. I will say that I was angry at Ava for having Emi help her break into Tracey’s house. I didn’t like that.

Mily: I guess so. I mean yes having Ava in her life stopped her returning – yet again – to Morgan but I was really unsure about Ava the whole way through the book. Right up until the end. But maybe I’m just a skeptical person?

Would you have opened Clyde’s letter?

Mily: It would appear that you’re a nicer person that me!

Do you think that the way Caroline’s arc was cover was appropriate for the overall storyline of the book?

Mily: Yes and no. I think that having it told by the different people that knew Caroline was really interesting and I don’t think as a reader we needed to know every detail. The book wasn’t about Caroline and we were given just enough to satisfy our curiosity but not too much that it over shadowed everything else. I do however think I would have liked more of it to have been told from Frank and Edie. Although that my just be because they are the cutest damn thing ever!

Stefani: I too loved Frank and Edie. I don’t know how I felt about Caroline’s story. I did like that we learned about her from several other people’s experiences with her, and it wasn’t too much info about her. However, I also feel like we could have used a few more details about her, especially if we could have someone learned something from Caroline’s own perspective because we don’t know if anything we learned about her was actually true.

Mily: I hadn’t actually thought about it that way. I mean I liked that fact that there was still a question mark on the whole Caroline story because I guess that’s how it would be in real life. It’s not all going to be given to you in a neat little bow. However, now that you’ve mentioned it maybe something solid, as in real evidence to what happened would have been interesting.

How did you feel towards Tracey? Did you understand her behavior towards Ava?

Mily: She made me angry. I’ve already said that I think she needs someone to point out how to be a half decent mother but I also think that Ava is better off without her. Even if she was a problematic child there’s no excuse for the way Tracey treated her.

Stefani: Oh man, she pissed me off. Yes, Ava was sometimes a pain in the butt as a daughter, but she also probably wouldn’t have acted that way if Tracey had actually been a good mother to her. Even if Ava wasn’t actually her daughter, she didn’t treat her like a decent human being. Personally, I cannot understand treating someone differently because of their sexual preference, so Tracey’s opinions made no sense to me. I really didn’t like her.

What was the main thing you took away from the book?

Mily: There are a couple of things but instead of going into them I think that the quotes alone speak for themselves.

“It’s all about the danger of leaving things unsaid. It’s about failure… We all get afraid. We need to be brave.”

Stefani: I’m going to do what Mily did and give you two quotes as well:
“There are no scenes in life, there are only minutes. And none are skipped over and they all lead to the next...All she is – and all she’s ever been – is a person trying to live a life.”

“‘What’s the use in waiting until the right moment if that moment never comes?’ I say. ‘What if the moment escapes you in a split second when your focus was elsewhere?’”

Mily: I think that the second one is really good advise… you can miss a lot if you’re busy waiting for something to come along.

A running theme throughout this book was Fate; do you think it was fate that bought Ava into Emi’s life or just coincidence?

Mily: I’m very much on team-universe-has-a-plan-for-you and I loved that everything connected. Yes it did make the whole story a tad on the predictable side but it also made it uber cute. As Emi said, it felt like Ava was always meant to be a part of her life.

Stefani: I too thought it was somewhat predictable, but I absolutely loved when everything worked out in the end. I think part of it was fate, but I also think that you make decisions that affect what happens to you. Just check out the second quote I used in the previous question.

What was your favourite moment from Everything Leads To You?

Mily: This is the easiest question for me. My favourite moment was when Emi shows Ava the finished apartment, right at the end of the book, and Ava just lives there for a moment. The way it’s described as she makes herself tea, leaving stains on the counter top and how she walks out of the house barefoot. It was so simple and really moving.

However, I think that my favourite quote from the whole book was actually the very end. It was kind of perfect.

“He’ll grin, say, You made a movie, of course, how perfect. And I’ll say, No, that’s not it. He’ll cock his head, waiting for more. I’ll take my time, keep him guessing.
Then I’ll say, I fell in love.”

Stefani: I loved several moments in this book, including the one that you mentioned. However, I think if I had to pick, my favorite moment was when I realized Emi was starting to change. Emi is thinking of what she could use in a scene to convey memory and sadness. She thinks about Morgan, but realizes the scene isn’t only about sadness; it is also about yearning. Then she says when people watch the movie, they’ll be feeling for not only the character but themselves,

“How it is to be alone, and maybe, if we’re lucky, how it is to be ready to open ourselves up to the fragile hope of something new.” <3

at August 17, 2014
Email ThisBlogThis!Share to TwitterShare to FacebookShare to Pinterest
Labels: book club, Book Review, Contemporary, Everything Leads to you, Nina LaCour, the summer blogger promo tour, Tour Post, YA